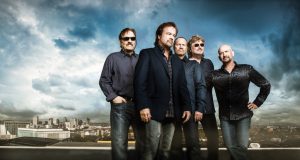 A portion of wine sales will be donated to Operation Surf.

With Restless Heart’s long history of playing for troops all over the globe, Rava Wine + Events is proud to donate 15 percent of sales of Rava Wine’s popular Pinot Grigio to local nonprofit Operation Surf, which teaches surfing to wounded veterans and active military members. Those who show a military ID at check-in will enjoy VIP entry and a complimentary glass of Pinot Grigio.

Tickets for Restless Heart officially go on sale Friday, April 19, and can be purchased at my805tix.com.

One of the most popular bands in modern country music history, Restless Heart formed in 1983 in Nashville and has had six No. 1 hits, four Gold albums and is often referred to as country music’s answer to The Eagles, thanks to their signature silky-smooth harmonies.

After taking a hiatus in the mid-1990s, lead singer Larry Stewart scored a huge solo hit with “Alright Already.” Meanwhile, guitarist Michael Jennings played with Vince Gill, and drummer/vocalist John Dittrich formed The Buffalo Club. The original members reunited in 2003, and have been touring ever since.